Dogs are not just cute and smart. They can also be kind, and they seem to understand how empathy works. This is why it is normal for pooches to cuddle with you and cheer you up when you are feeling down.

An adorable pup was caught dragging his bed over to his brother. He evidently wanted to make his brother feel comfortable. Such a scene would make you ask what people did to deserve such marvelous and kind dogs. 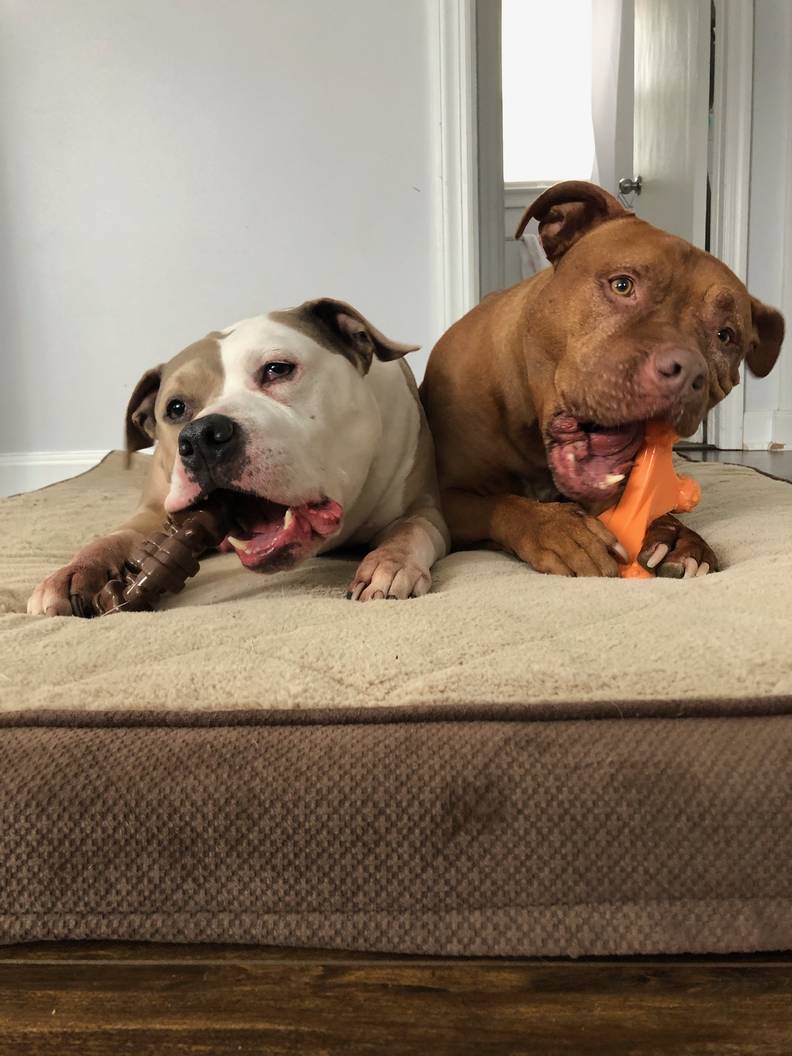 The two dogs were named Roman and Spanky, and they lived with their owner Jill Rogers in Hopatcong, New Jersey.

Jill said that the pair had been best friends since the day they had met each other. They were inseparable. She explained that when Spanky was brought home, he was “infatuated” with Roman. He bonded with Roman so tightly, and he did not want to be far from him.

Roman is the red one and Spanky is the white one. Roman is 8 and Spanky is 6 1/2. We’ve had them both since they were puppies! Roman is energetic, serious, all about hikes & playing, while Spanky is about snuggling, laying down, & sunbathing in any sunspot he can find. Since the day we took Spanky home, he bonded with Roman instantly. He has always cuddled up next to him throughout the day/night.

When Roman moves, Spanky moves to be near him. If we leave the house with Roman without taking Spanky, you can hear him crying/barking from outside as soon as the door closes and if you check the camera, he will be laying at whatever door Roman left out of. –  Jackie Rogers (the owner’s sister)

However, Roman’s ear got infected. Jill took the eight-year-old pup to the vets, and it was found out that he had a hematoma. A surgical procedure was scheduled, but the pup was feeling uncomfortable while waiting.

Spanky realized that his big brother was not feeling well. So, he started to be much gentler around him.

Jill said that Spanky was not normally gentle. He was like huge moose, but when Roman was not feeling well, Spanky didn’t try to play or rough house with him like he usually did.

The gentle demeanor did not stop there. The family placed a camera in their home, so they could monitor their dogs while people were working. And it was through this camera that they saw a heartwarming scene.

Spanky was looking over Roman. He then got up and pulled his bed over to Roman. In another clip, the two pups could be seen cuddling together.

Jill said that she couldn’t believe what she saw, adding that it was just so wholesome. The interaction melted her heart. Watch the video that went viral here and see it for yourself  how this adorable dog brings bed over to his sick sibling and cuddles with him:

Some are having trouble finding the video so I wanted to post it so everyone can see it! ❤️❤️ thank you all for your kind words we are so happy everyone is loving our boys! #pitbullsofinstagram #dogsofinstagram #thedodo #unilad #uniladadventure

Dogs are touching our hearts, changing our lives and amazing thins are happening.  One such amazing thing is The Story Of A Woman Who Found Her Pooch After Six Years.

“Woman And Her Pooch Reunite After Six Years”

I wish you and your dog a wonderful day ;).

“A dog is the only thing on earth that loves you more than you love yourself.” This quote is attributed to Josh Billings and those who have or had a dog will totally agree with it. Hi, I am Inaeliza and I love all animals, especially dogs. I want to share with others how wonderful it can be to have a dog in your life because a dog can really change your life and your heart.

Our website is made possible by displaying online advertisements to our visitors. Please consider supporting us by disabling your ad blocker.